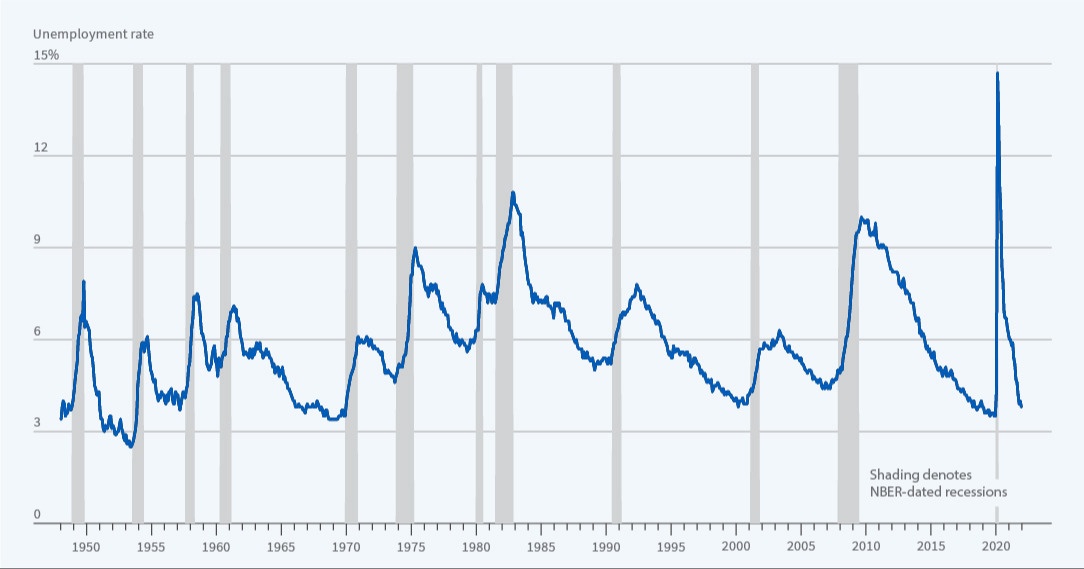 Calling it a recession will help your portfolio.

The US has been through 13 Recessions since 1945 | Shaded areas in the graph denote NBER dated recessions between 1950 & 2020 and the graph line denotes unemployment rate.

Last Thursday we got the first look at 2nd quarter GDP (Gross Domestic Product) and it surprised economic analysts with a -0.9% reading, following expectations for a positive number. The economy has now had two negative GDP quarterly readings in a row and the US is most likely in the midst of a recession. Let’s first look at how this affects your portfolio, and then we’ll dive into the details of how a recession is defined while looking at it from a historical perspective.

I believe the surprise negative GDP reading is positive news for the stock market because it takes away the uncertainty from analyst forecasts of a recession in 2023. Most economic analysts were predicting a recession in late 2022 or in 2023 and couldn’t accept that we are currently in it. The prediction of a future recession was a big headwind that stopped investors from getting back into the stock market and led to the market lows of mid-June. The realization that we are in a recession may mean that we will be through the worst of it sooner than predicted and better economic conditions will follow. I believe this will bring more buyers into the stock market to continue the rally from the June lows and increase distance from the darkest days of the bear market. Because of that, I continue to see this as a buying opportunity to invest excess cash and open new accounts.

The Anatomy of a Recession

The National Bureau of Economic Research (NBER) is the official agency that defines when the US is in a recession. “The NBER's traditional definition of a recession is that it is a significant decline in economic activity that is spread across the economy and that lasts more than a few months.” The factors to identify a recession are multifaceted and it takes several months after the event has occurred to have sufficient data to name a recessionary period. Three of the most important data points are GDP, personal income, and unemployment. Currently our economy doesn’t fit all the criteria for a recession, but most of the new and revised data seems to be pointing in this direction.

It's more profitable (and healthier) to be positive about a recessionary period, and the data backs this up. Since 1945 the US has been in 13 recessions, but their average length is only 10.2 months. That means the US economy is in an expansion fully 86.6% of the time. Historical data also shows that modern recessions are substantially shorter than they were before 1945. Between 1854 and 1945 they averaged 17 months in length and the economy was only in an expansion 55.5% of the time. I believe we can attribute this progress to a better understanding of the financial markets and more precise tools to regulate the economy. The Federal Reserve makes plenty of policy mistakes, but they seem to be getting better and better with the difficult task they have.